My mini-golf birthday bash. Wow, that was a long day. In a good way. Nice picnic, a couple of rounds of mini-golf and... the bumper boats. When we'd decided we wanted to do the bumper boats, we though that that would be all there was involved. Boats. Smacking into each other's bumpers. Like bumper cars. When we got into the boats, though, we realized that they had water cannons on them. Oh, boy. The four of us (me, Lynn, Rob and Kama) and a few kids. Needless to say, the kids were merciless with their cannons. Mostly towards Rob, but we all got our share of spray. On the other hand, it was nice to have targets I felt no remorse about soaking back. So, we ended up just a tad wet at the end of it all... 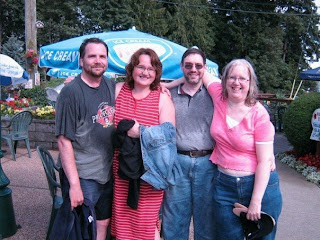 Good news on the work front. I finally score a permanent position with the library, out at the Juan da Fuca branch. It's only half-time, but it's a big step forward. And a relief.

It was all rather whirlwind. Thursday afternoon, I get a phone call asking if I can come in for the interview the next morning at 9! I make it in, do the interview and am told the decision will be known later that day. I got a call right around lunch telling me I got the position! Less that 24 hours. Whew...

Bad news on the work front. A strike seems increasingly unavoidable. This might become my "strike blog" for a while. Heavy sigh.
Posted by Doug A Scott at 8:42 p.m. 4 comments:

Ahem. Yes, it's been a while since posting. And I have no good excuse. I have excuses; they're just not good ones.

So far, Lynn's got, um, four characters, I think? Maybe five. I'm just sticking to two. Which, in a bit of web weirdness, you can actually see, even if you don't play the game. There's Duglas (so called because Douglas was unavailable on our chose server), the human paladin. And there's Lumiaris (so called because I couldn't think of anything and just went with a randomly generated name), the night elf druid.

Moving on to other happenings... the strike vote I mentioned a couple of posts back? 90% in favour. No strike is imminent, but if negotiations don't improve sometime soon, it looks like we'll be hittin' the pavement.

I hope to have something actually interesting to post soonish. We're going up-island tomorrow with Rob and Kama to mini-golf. There may be photos. And it so happens to be my 39th birthday tomorrow, as well, although it wasn't planned to have the two together. Just turned out that way.
Posted by Doug A Scott at 1:55 p.m. 1 comment:

Doug A Scott
Victoria, BC, Canada

Other blogs I read

My other webby stuff