A whirlwind trip to Toronto: Part 2

The following day saw me getting up in time to quickly visit actor and internationally renowned children's author Adrienne Kress for a photo op with her cat, Atticus. The first results were mixed, with Atticus and me seemingly unable to both look at the camera at the same time. Eventually, though... 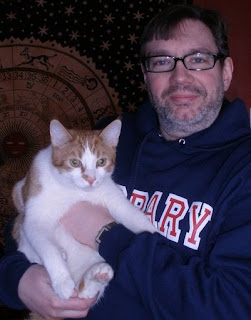 Ta-da! Unfortunately, poor Adrienne was under the weather, so, rather than impose on her, I went on my way.

Then, that evening... the main event! The Tempestuous launch at the Dom.

Wow. One hell of a party. I have never spent such a long, continuous time in a bar or pub. I was there from a little after 6PM and didn't leave until 3AM. Yes, that's right, 3 of the morning clock. Fortunately, my internal clock, still on Pacific time, felt it was only about midnight. (On the other hand, getting up for breakfast at the hotel meant my internal clock also felt like I'd been up since 5 in the morning.) I'll have to confess that for the first couple of hours, I went into my default "wallflower mode". This tends to happen at parties where I only know about 2% of those present. However, by the end of the night I was having an absolute blast!

The launch officially started a 7:30. Folks mingled, ale was consumed (okay, I had Sprite) and, in a back room, the full trailer for Tempestuous was screen on a continuous loop. Largely thanks to director and effects fella Joe O'Brien, it felt more like a trailer for a Lord of the Rings film! Check it out:

After a while, it was time for Lesley to do a reading from the book, which I took a video of:

After the reading, Lesley was then put behind a table to meet fans and sign books. This went on for damn near four solid hours. And somehow Lesley managed to keep her energy high, as well as her enthusiasm for meeting her fans. 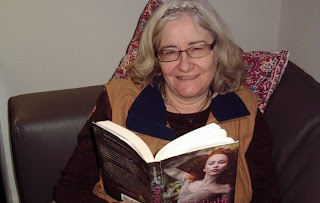 Yup. She's reading one of Lesley books. OooooEEEEEoooo.... Jon Llyr brought the article up on his iPhone and the universal reaction to this from party attendees was, "Oh my God!" Okay, end of eerie tangent.

A few of us who are regular posters at Hardcore Nerdity managed to find each other for some chat. We were eventually joined by Lesley, once she finished signing 823,000 books. And then...

A rock concert broke out. Really. The music for the evening was supplied by one John Stuart Campbell on guitar and eventually people went up on stage to sing some tunes. Most notably Jon and Lesley. Lesley pretty much blew my mind by completely substituting her own voice for a another as she did the Doors' "Roadhouse Blues":

I found myself wanting the whole shindig to never end but, alas, the time came when I had to leave. I had a plane to catch the next day for what would be a 12-hour trip back home.

It was awesome seeing these ridiculously talented and cool friends again and I look forward to visiting them again. Lynn and I hope to head out their way again for next Halloween. Now, we just need to figure out what costumes to wear...

Here's a couple more images from the evening: 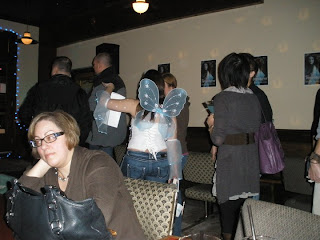 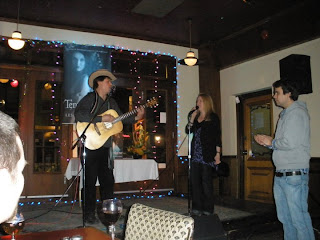 Lesley on stage about to rock out with John Campbell. 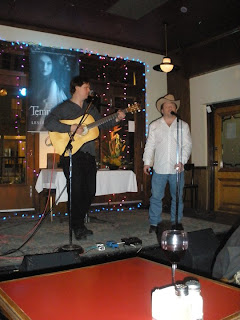 Jon Llyr in the process of rocking out with John Campbell. 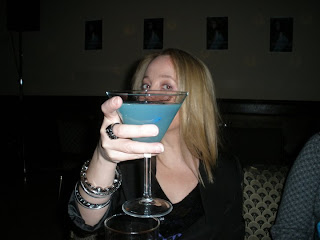 Lesley drinking something blue from the Wondrous Strange-themed martini bar. 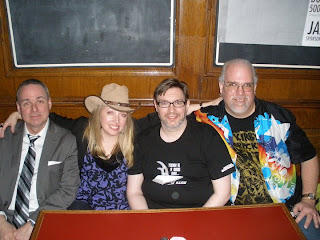 Lesley and me with fellow HcNers James Marshall and T. Gregory Argall.
Posted by Doug A Scott at 10:37 a.m. No comments:

A whirlwind trip to Toronto: Part 1

Some time in December, I received an e-mail invite from Harper Collins Canada, saying "Come on out for the book launch party for the new book, Tempestuous!" It was just a generic thing sent out to people subscribed to news about my friend, internationally renowned young adult author (and former Waitron-9000 portrayer), Lesley Livingston through the HC website.

And, while it certainly crossed my mind how much fun it would be to attend, I didn't seriously consider doing so. But, as I'm reading it aloud to Lynn, she suggests I use a chunk of our AirMiles (unfortunately not enough for us both) and just go. And that I not even tell Lesley, but just show up!

So it was that, a month later, I found myself getting up at a quarter to six in the morning in order to catch a flight to Toronto, Ontario. From Victoria, BC. For a single evening's party. As a surprise. (Although I had told Lesley's boyfriend, Canadian nerd célèbre and former Grot-portrayer, Jonathan Llyr. Who is da man. Hold on, do people still say "da man"? Well, if they do, Jon is da man.)

The trip didn't start at 100% goodness, though. The airport security people had to take the teeny-tiny, fake (well, duh) laser gun that was on my keychain. At least they were apologetic about it. They seemed to realise how silly it was to treat this like a threat of any kind, but still had to enforce the rules. "Is it your Jedi laser?" (I was wearing my Back to the Future t-shirt, so I think they knew I was a nerd.) And, no, I did not point out to them that Jedi don't use guns; I wasn't going to abuse the goodwill that I was getting from them over the issue.

The rest of the trip east was a pretty standard, uneventful (if long) flight and I safely reached my lavish suite in the luxurious Holiday Inn Express in downtown Toronto. Afterwards, at Jon's suggestion, rather than wait until the party the following evening, when Lesley would be swamped talking to and meeting Lord knows how many people, I wandered down to the Dominion on Queen, walked in and plunked myself down in a seat opposite Lesley and just gave a little wave.

Now, I don't usually cause people's jaws to drop, but that night I did. (And, Lesley's mom, if by some chance you read this, I apologize for causing Lesley to cut your phone call short.) After Lesley getting over the initial shock, she, Jon and I sat around for a nice long talk, with subjects ranging from Toronto Mayor Rob Ford's idiocy to having molds made of your head, from music to kids hurting themselves trying to remove their tongues from frozen metal. I even Skyped Lynn using my PSP (which I discovered you can really hold like a phone while using Skype), so she could briefly say hi.

And so, a couple of hours later, I left the Dom with a warm glow (multiple hugs from Lesley will do that to you) to counter the chilly Toronto weather and headed back to the hotel.

But, that was only the first day...

More to follow in a later post. This time with pictures. And maybe video.
Posted by Doug A Scott at 12:56 p.m. 5 comments:

So, what have I been up to for the last... well, never mind how long exactly long... since I last tended to my blog? Here's a quick bullet list sampling of my life over the last couple of years. Things I might have actually blogged about had I been blogging.
Aaaand probably lots of other stuff that I can't think of at the moment. Anyway, there ya go. Caught up.

Now, I suppose I should see about update the layout of and information on the page.
Posted by Doug A Scott at 1:29 p.m. No comments:

Okay, let's get this thing rolling again! Cough! Cough! Right, gonna have to do some dusting around the place...

All right, I've realized something. I avoid putting anything new on the blog largely because I feel bad about not posting anything in a long time. And I hate starting every post with "Sorry I haven't posted in a while..." So...

I'm just going to post whenever, without starting with "Oh, it's been such a long time!" Maybe I'll post several times a day, maybe it'll be months between posts (because, let's face it, I hardly need the most exciting of lives). All right? All right. We'll see how things go from here.
Posted by Doug A Scott at 11:28 p.m. No comments:

Doug A Scott
Victoria, BC, Canada

Other blogs I read

My other webby stuff